Posted at 03:07h in Race Reports by admin
0 Likes
Keys 100 Race Report: SUB 16 woot woot!
So, if you read my Umstead 100 report, you know that I have 2 major goals this year…running happy and running smart.  Well, I ran happy :).  Running smart…not so much :(.  I wish I could say that I fully intended to go out in 8:10/8:15 pace and fall off a bit, but that would have been stupid planning.  So, I had a good plan, but stupidly didn’t follow it.  I wanted to go out at 9 minute pace (15 hours), knowing that the course record was 16:06.  I knew that it was a push in and of itself, especially since Indiana has not had hot weather for training.  There were about 10 people that shot out from the start at about 7:30 pace!  I told myself not to go with them and proudly let them go. I told myself to “run your race”.  However, I got caught up with Chris Roman doing between 8:10’s and 8:15’s for the first 15-20 miles.  We both agreed we were going too fast, but neither of us slowed.  I was enjoying the conversation and knew that a solo day of running would be ahead.  So, I took the company while it lasted.
I tried a different nutrition strategy because I don’t feel like I have perfected one yet.  I am always tweaking it, trying to perfect it.  I thought that liquids would be better in the heat.  However, after 3 trips to the porta-can, and my belly rumbling angrily, I switched back to my old standby of Hammer gels.  I really like gels, I just wish I could figure out something else to eat for variety sake.  But, after 4 hours into the race, 3 Immodiums down, and gels back on board, my stomach was solid.  My standard nutrition is (pre-race: Race Day Boost) Anti-Fatigue Caps and Race Caps Supreme every hour, Hammer gels (2 per hour), and Recoverite for recovery.  In addition, I switched between Fizz in my water and plain water with every bottle exchange.
Around 30 miles, I started having my husband Mike, put ice in my hat, and switch ice bandanas with me.  Staying cold and wet, was the key to me being happy.  Thanks Pam Smith for your Western States race report!  I actually wore a short sleeve shirt and hat instead of just being in a bra and hatless like I was at WS100.  I thought more clothes would be hotter.  But as long as I kept cold and wet, it was much better!!  I did not lube up enough like the “porn star” Pam Smith (if you haven’t read her WS100 report…hilarious read…I highly recommend), and now am suffering through the worst chaffing I have ever had.  🙁

I came across the 50 mile mat at 7:18 (with 6 minutes being potty stops)…waaaayyy faster than I planned.  At that point I tried to slow and get into a rhythm.  At mile 53 (mile marker 47…the mile markers count down as you go for easy math to figure out how much you have left).  I saw Dave Krupinski who was 1st male/2nd overall in 2013.  I knew that he had gone out hard with Alyson Venti.  After seeing Dave, I was hoping my “relatively” slower start would help continue to bring people back to me.  Mile Marker 47 was the beginning of the 7 mile bridge.  I wanted to check how I was doing with my hydration, so I weighed myself on a scale I brought from home (the Keys100 doesn’t have any medical checks).  Upon weighing, I lost a little over 3 pounds.  I figured I could lose up to 7 without concern.  Feeling good about my nutrition/hydration I headed out with my extra handheld, and cruised across the bridge.  The wind was especially gusty at our backs on the bridge.  I was trying to take it easy, but dropped low 8’s and a 7:57 split the whole way across.  The tailwinds were nice for the push, but had dried my clothes and hat completely.  The 86 degree temps could be felt on the other side and I felt dizzy.  I squatted down, holding the guardrail on the other side.  My genius husband brought me Pringles from the car to get my salt levels back up.  I re-drenched my bandana and hat, and after a couple of minutes started walking.  I came upon a wrapped cherry jolly rancher on the bike path and did what any good ultra runner would do…I picked it up and ate it.  The Pringles and jolly rancher perked me up and away I went again.
Just under 40 to go.  I was starting to slow and run in the 9’s, which I was trying to convince myself that I should have been running anyway from the beginning.  “Be happy!  You are finally running what you were supposed to run”, I said to myself!  The one thing about going out too fast, is that you will always slow down eventually…slowing is inevitable.  I got to the mile 70 checkpoint and was informed that there were 4 people in front of me including 2 men and 2 women: Alyson (45 min. lead), Kaitlyn Nagy (new 24-hour USA team member; 30 min lead).  I didn’t really want the information, but the aid station people offered it up.  I don’t really care where people are until the last 20 miles or so.  Ultimately, I am going to run my race…it is what it is.  The knowledge of being so far behind, kind of brought me down a notch.  I told my husband I didn’t have any hope of catching either chick, but was focused on breaking 16 hours.  That’s where I needed to get my head…break 16…break 16!! 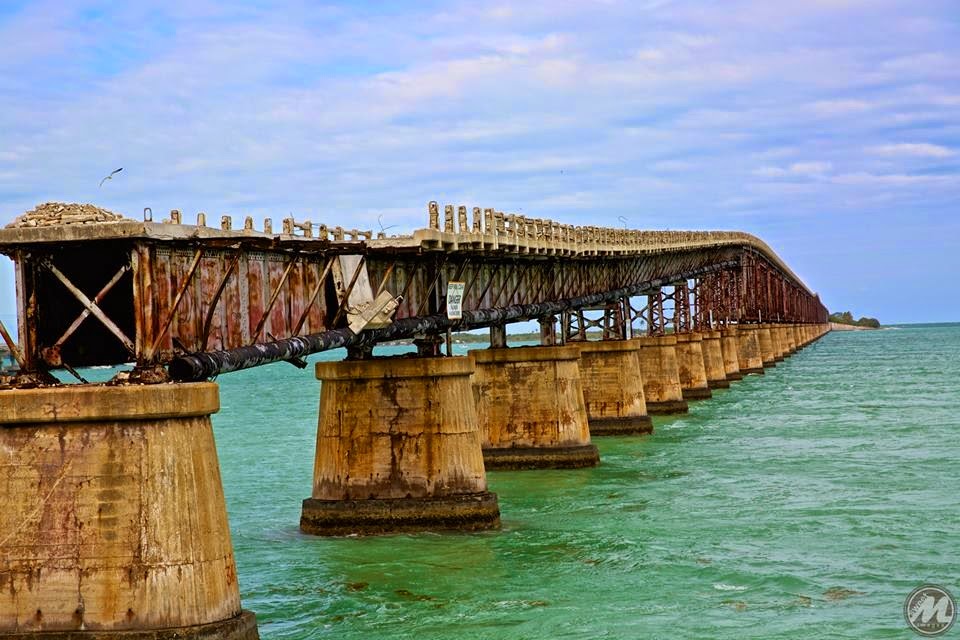 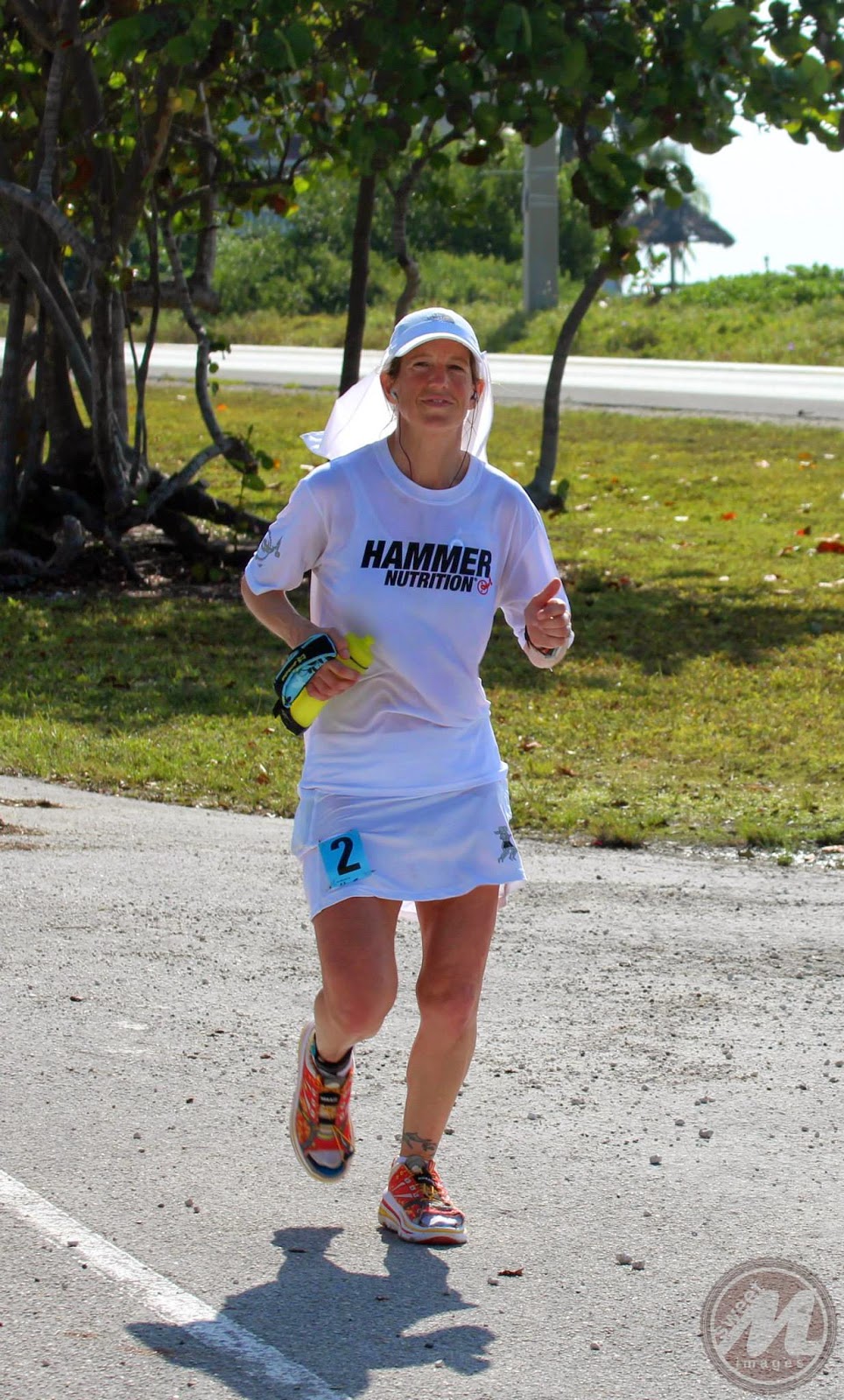 At that point (still being able to do math), I knew if I could average under 10 minute pace per mile, I would break 16.  I didn’t worry about anyone else.  I just watched every mile tick off on my watch.  Somewhere, around 20 miles to go, I passed one of the men.  That fueled me.  I started getting back in a rhythm, running 9:15’s to 9:40’s.   My husband alerted me that I was only 17 minutes behind Kaitlyn with about 17 miles to go.  I said I didn’t care…I’d have to gain 1 minute per mile to catch her, which I didn’t think was reasonable.  2 miles later, he said I was 14 behind; 2 miles later-15 behind (still not caring); 2 miles later-7 behind.  Okay, now I care.  It was possible to reel her in.  At this point, I was rewarding myself for staying under 10 minute pace.  If I ran 9:50 or less each mile, I would walk for 10 seconds.  I figured it was working, so I kept my 10 second walk break rewards.  I wanted sub-16 and now had the possibility to move up a place!  2 miles later, I was only 3 minutes behind.  I kept cranking.  At 6.5 miles to go, I caught up with her.  I said good job, hating to see her fading, but feeling good I was now 3rd overall and definitely going to be sub 15:45.
I was a little nervous about getting lost once we got into town, but it was well-marked.  My husband met me with a 1/4 mile to go and we ran in together!  15:35!!!  As I crossed the finish line, I was greeted with cheers from the beach party that would go all night.  Relay Team 551, who I had run back and forth with all day greeted me and treated my like royalty.  They said they were impressed and inspired by me.  But, I don’t think they understood how all their kind words and cheering kept me inspired all day!
The Keys 100 is a great race!  It is well organized and has an uber sweet RD who goes above and beyond for his runners!  The course is awesome, with gorgeous views!  One of the cool things about the Keys is the relay component. It had the feel and camaraderie of the 200 mile relay teams I’ve been on in the past.  Constant companionship, car honking-cheering, and words of support were shared between runners all day!  The medal and buckle are beautiful and well-made.  The shell awards are super fun!  The host hotel held the
packet pick-up, pre-race meal, and literally in the parking lot next to the start, making it tremendously convenient!  The post race party goes all night with burgers, chicken, beer, energy drinks, pop, chips, etc.  I didn’t feel like eating until the awards ceremony the next day and there was still plenty left.  I am not a big repeater of races, but this is definitely a race I would do again!
Thank you Hammer Nutrition for the great race fueling!!  Your products keep me cruising  and feeling energetic all day!!
Thank you Running Skirts for my awesome white skirt that kept me cool, looking cute, and was virtually the only unchaffed area of my body!
Thank you Coast for your awesome lights!  My new headlamp was comfortable and super bright!  I loved it.  My husband is still coveting his new “crew flashlight”…he played with the telescoping mechanism a little to gleefully 🙂  Boys and their toys 🙂
Thank you Drymax for the comfortable socks!
Thanks Melissa (SweetM Images) for the awesome race photos! 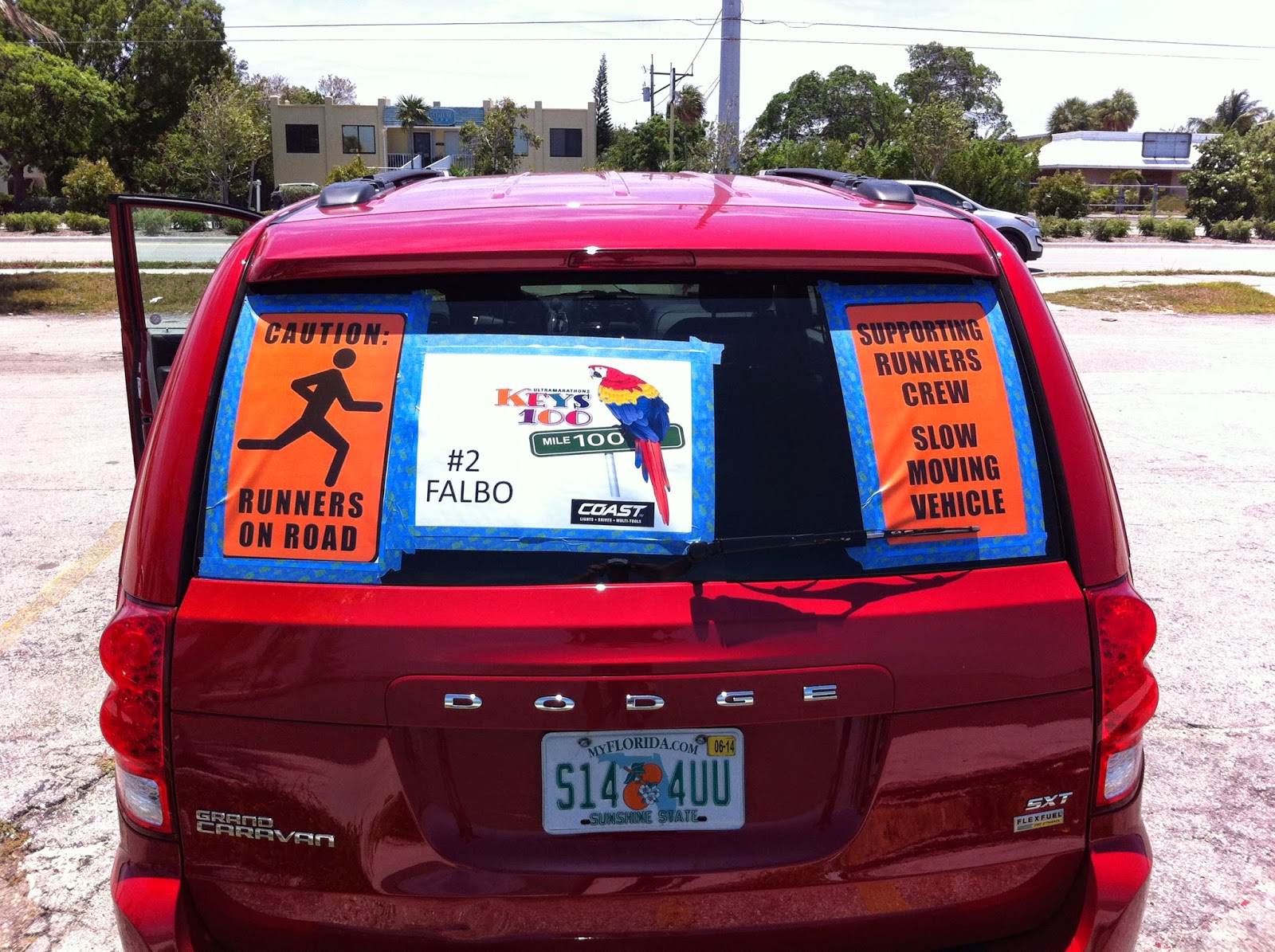 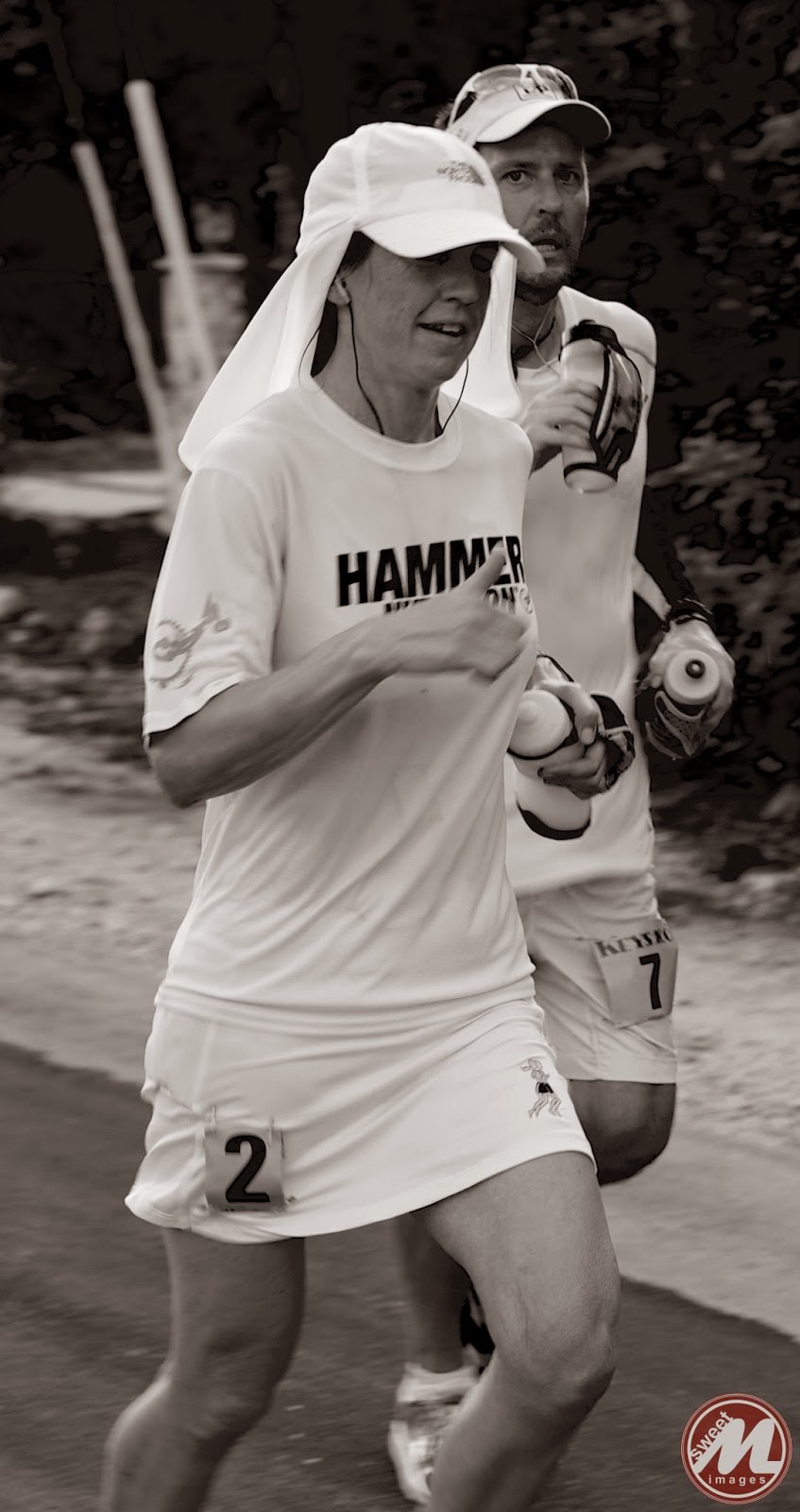