Posted at 22:46h in Race Reports by admin
0 Likes
Kettle Moraine 100 wasn’t on my radar for the year. My original plan was to run at the 24-Hour World Championships in Czech Republic June 21-22. When it was cancelled, I looked for a substitute race and decided on Kettle. I have always wanted to run it, but it was only 3 weeks after the Keys 100. This was to be my 3rd 100 miler since Umstead in early April. I learned WHAT NOT TO DO with quick turnarounds between 100‘s during the Grand Slam of Ultrarunning last year. My Slam downfall, was not resting enough between Slam races. I found out my body likes rest after a long race. So, this year, my new regimen is to take a week off after a 100 miler.
I went into Kettle with optimism, questionable legs, and the following goals:
I was hoping to get in Friday to pick up my packet and find the start line. It’s always good to know where you are going on race day. However, my daughter made it to the state track meet in Indiana with her 4×800 team!! I was so excited for her and her teammates. Unfortunately, my pre-race plans had to change, as my daughter’s race started at 4:15pm in Bloomington, IN on Friday (6 hour drive from the Kettle start). I wouldn’t miss her race! We drove up and watched her team smash the school record for the 3rd time this year and finish 19th in the state (they were ranked 26th coming in). This meant a long drive starting at 5pm-ish with a quick stop to get Fazoli’s to go. We got in around 11, got settled and set the alarm for 4am.  I wanted to leave the hotel in Janesville by 4:40am to get to the start by 5:15am, in time to get my packet, chip, and take care of pre-race business 🙂
Despite the fact that my Garmin didn’t recognize the road from Janesville to the race for about 10 minutes, we made it there by 5:20.  I ended up with plenty of time to get ready.  Race Directors Timo and Jason were laid back and hilarious.  There was a 10-minute no nonsense, comedic, race briefing. Timo drew a shaving cream arrow on Jason’s back to illustrate what course markings looked like. Jason promptly laid prone on the ground to demonstrate for full effect.  I don’t know if it was just because I was low on sleep or what, but I laughed hysterically.  I hate briefings that go on for hours without really telling you anything. This was perfect.
A little low on sleep, and a little unsure of my legs, I started off at a pace I thought was conservative (at least for my usual going out too fast style). I ran with two guys: Kyle Curtin, who was running his 3rd 100 miler and Bruce Udell, a local masters runner.  We all talked for several miles and enjoyed the temps in the lower 60’s while they lasted. 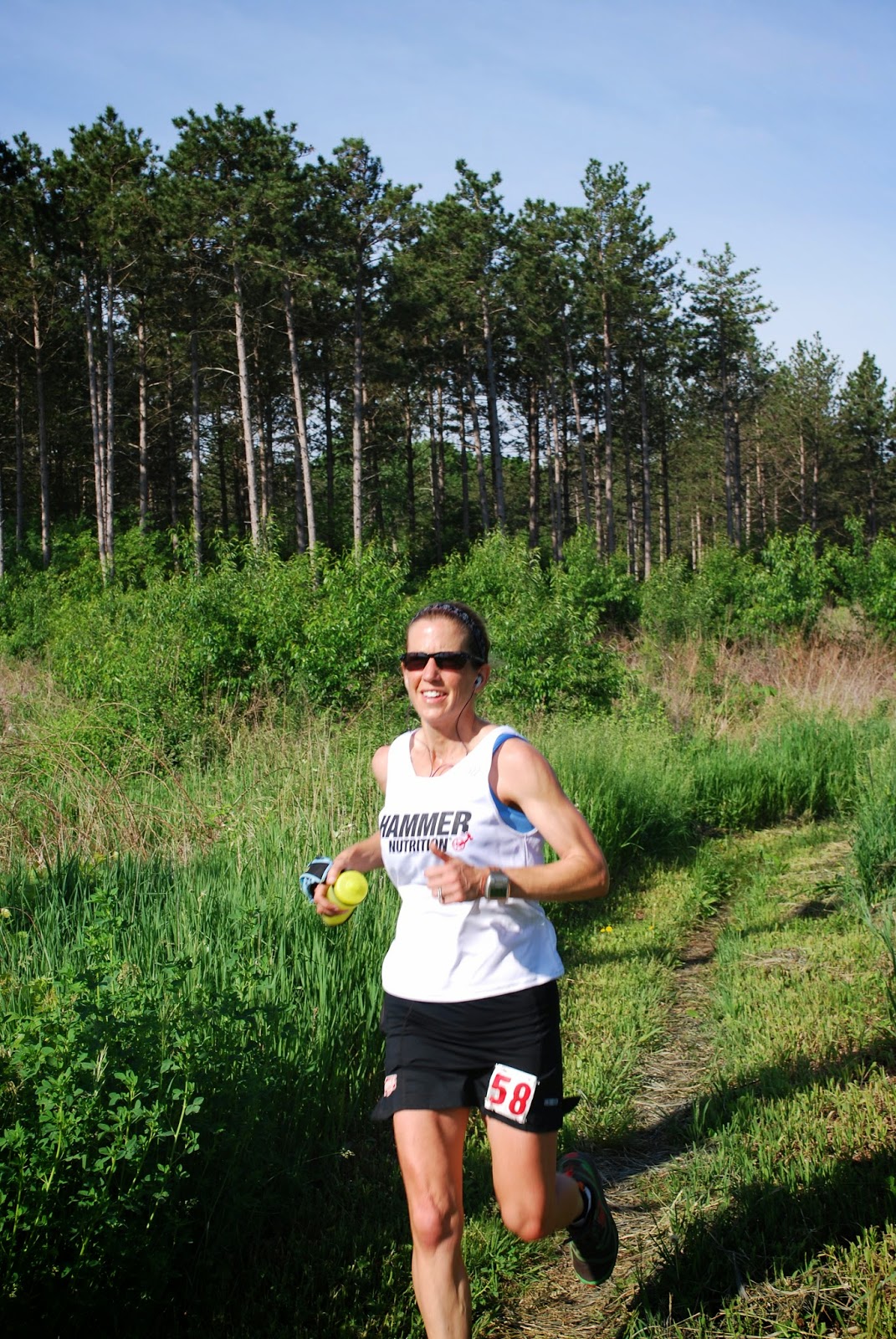 To be honest, I was enjoying the trails and single track again.  I rarely run trails, so the novelty of being in the woods with wildflowers and wildlife was distracting me from my cruddy feeling legs.  I was feeling my 3rd 100 miler in 10 weeks and was having flashbacks of Leadville last year.  I kept pushing aside those thoughts, knowing I was on a more forgiving course, which better suits my running style. After all, negative thoughts don’t help me run happy 🙂

As I said in my goals, I was nervous about getting lost, so I made a cheat sheet days prior to the race with a list of all the warnings of where someone might go off course.  I had the 8-1/2 x 11 piece of paper in a ziploc in my pocket with mile markers and descriptive details.  I got past the two major places where one could easily go off course. It was marked incredibly well. So, I never referred back to my cheat sheet after that.

The hardest part of this course was actually fairly flat. There was a meadow approximately 6-7 miles long. It’s an area where you run through meadows with ankle-high grass.  I averaged good times in that section, but it was hot and humid.  I was surprised that it felt sooo hot at just 9am. I met my crew at the end of the meadow area and told them I was ready to get ice in my water bottle and start getting an ice bandana around my neck. I would definitely need to be cool when I went back through that area 10-11 miles later. (The Kettle Moraine course consists of  two out and back sections, the first of which is 100K). 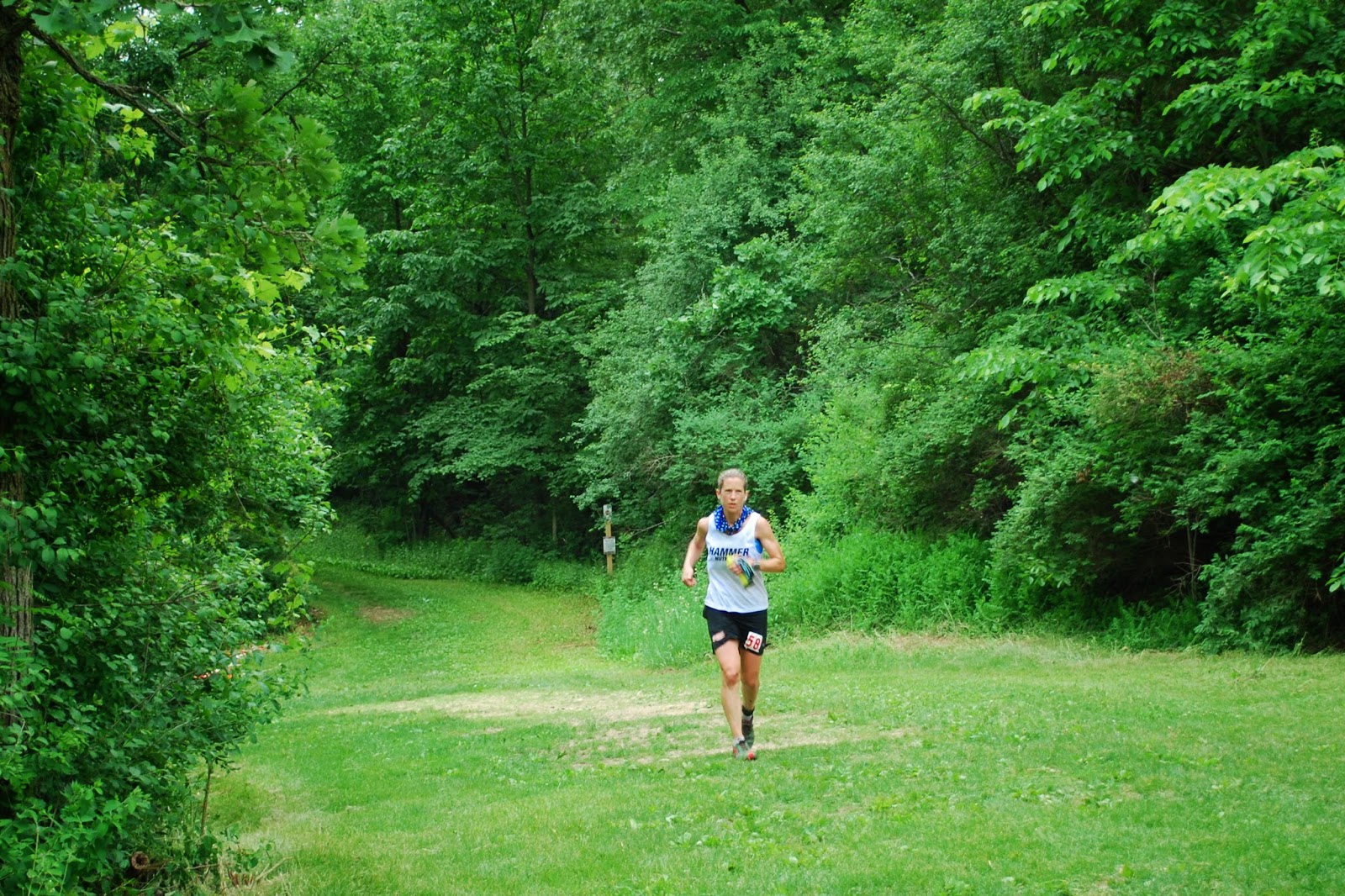 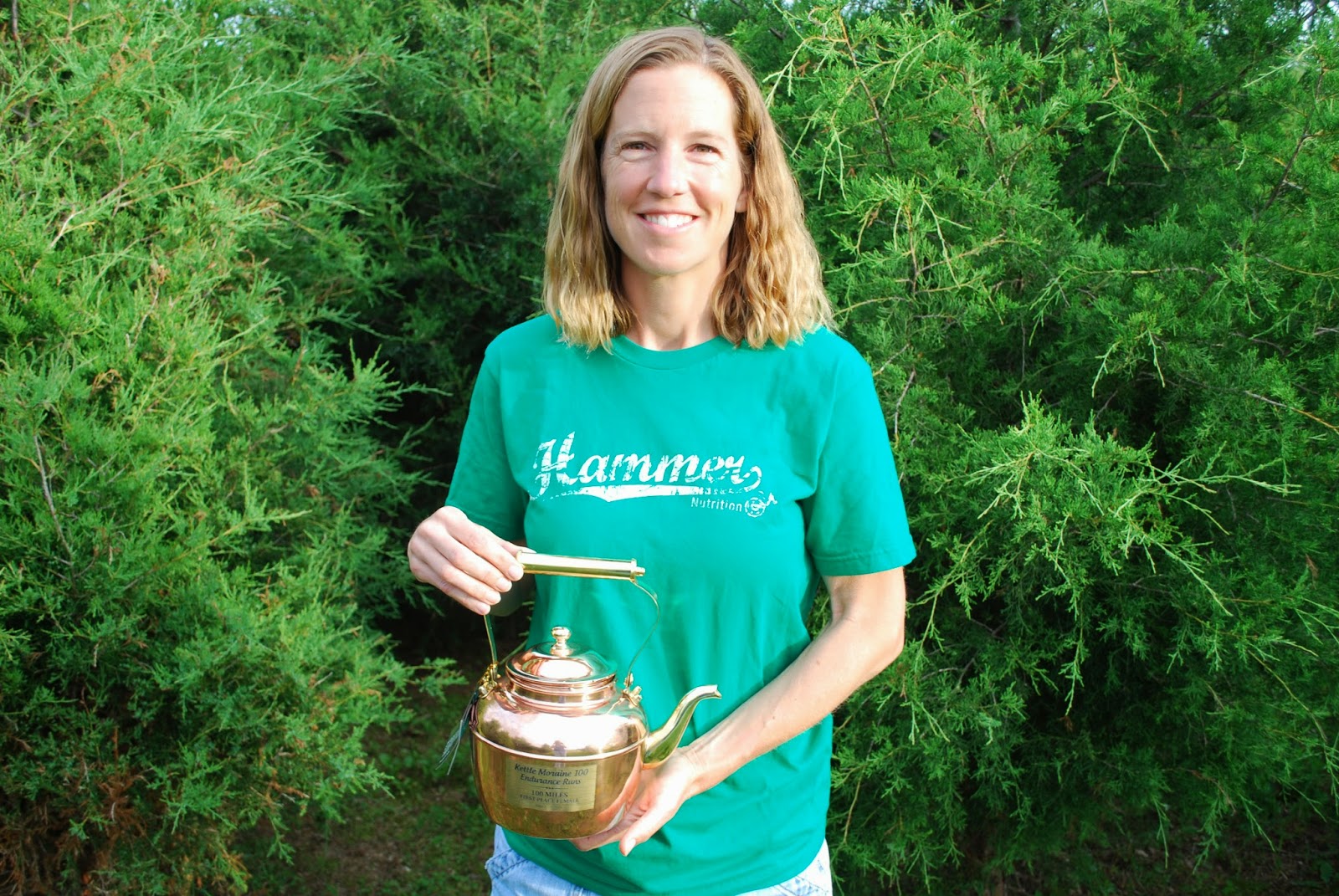