I ran through the tunnel, seeing my friend Troy coming towards me. I figured he was about 5 miles back. I hollered at Troy to get his fight back and told him that the guy who had been leading was dying…he could salvage his race and maybe come up with a win.  I was looking back and cheering him one minute, and the next I was on the ground. I laughed out loud. Man, I am so clumsy. I fell on a 5’ wide limestone path. I had gotten too close to the edge, tripped on a rock and Superman’d it down. I got back up, took a moment to assess myself and started going again. I tried to figure out who was coming towards me in the dark to cheer people on. I realized my friend Cynthia was in 2nd place for the women and I told her that she was in 2nd. She was excited to see me leading. Around 98.5 miles, I saw two headlamps approaching and tried to avoid them (runner and pacer). I put my hand up to block the lights from blinding my eyes. Crash! We all three rammed into each other, bouncing off each other like pinballs. They thought I was going to give them a high-five and I couldn’t see anything which resulted in the collision. We all apologized and continued running once we realized everyone was OK. We all laughed about it later.
I was thrilled to run the last bit in, knowing I had accomplished my sub-15 goal! Plus, an overall win, and a top ten place on the all-time list…it couldn’t have been a better day. I had a few low spots where I let myself be talked into walking when I could have probably pressed on or just slowed a bit. But, I am not going to be hyper-critical. I took my nutrition like clockwork, ran happy, paced myself, and it all paid off…even without my pony! 🙂
I left to get out of my wet, cold clothes and came back to see my friend Troy finish and claim his 2nd 100 mile victory this year! It was bittersweet. I felt bad his race didn’t go as he had hoped. We are both competitive and wanted to beat the other, but I never dreamed I would beat him. We had always talked about a how cool it would be if we could go to a race and get a “Team TnT” (Troy-n-Traci) win. We were thrilled that it had finally come to fruition.
Tunnel Hill is probably the fastest 100 mile trail course in the US. If you want a PR or want to finish your first 100 miler…this is the course for you. This was a first year race, but Steve Durbin is an awesome and experienced RD who along with his volunteers made the race seamless. 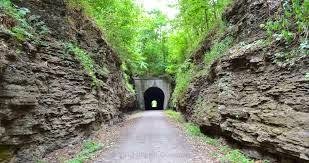 I cannot thank my husband, Mike enough! He is a phenomenal crew person! I would not be as successful without him! He has saved me time in many races, playing an enormous part in my success. I would not be where I am without him. Crewing is harder than running. It was cold and sleeting, and all the while he was out there supporting me! Make sure you all thank your crew!
Thanks to Hammer Nutrition for making my belly the most content it’s ever been. I took Race Day Boost 4 days prior to the race, gels every 30 minutes (love the new chocolate hazelnut flavor!), Race Caps Supreme and Anti-Fatigue caps every hour starting at hour 2, and Fizz for electrolytes.  Thanks Coast for the uber bright headlamps that I wore for the last 40 miles! Thanks to Drymax for the awesome new Trail lite socks. My feet looked better than ever after the race! Thanks to running skirts which I look forward to wearing in Arizona next month…the new honeycomb pattern is adorable!